You are at:Home»Preservation»A Bridge Not Far
By Kathryn Louyse on July 31, 2016 Preservation 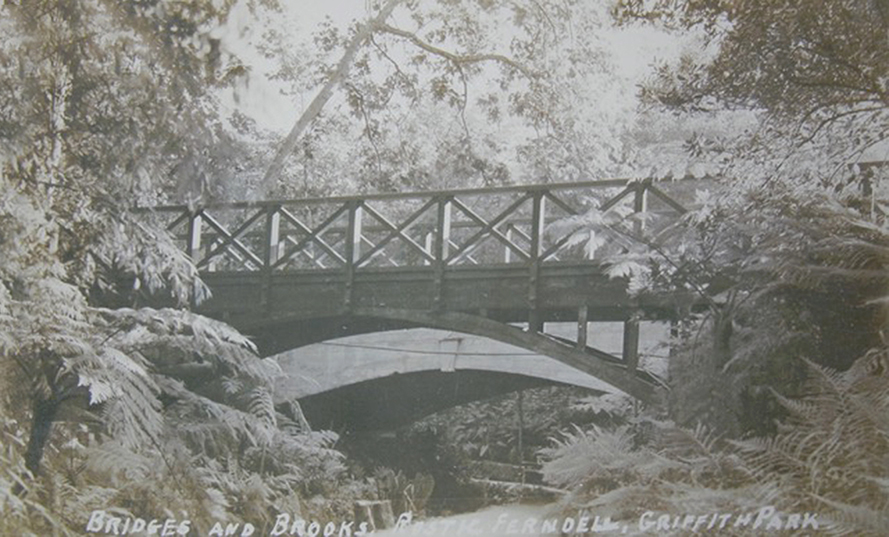 If you’ve taken a Friends of Griffith Park (FoGP) tour, you’ve seen early postcards of the once-graceful pedestrian bridge in Fern Dell. Its wooden arch used to perfectly match­­ the adjacent auto bridge arch. Originally, the railing had a criss-cross design popular in the 1930s. Log beams further complement the rustic nature of the bridge.

Several years ago, LA’s Recreation and Parks closed the bridge because one of the three support logs was rotted and several decayed deck boards placed hikers in danger of falling through.

Because this pedestrian bridge is currently inaccessible, it’s created public safety concerns. Hikers and families with baby strollers come upon the closed bridge and must alter their route. Some hikers step onto the auto bridge but this is extremely dangerous as the bridge is narrow and heavily traveled. At the request of FoGP, Rec and Parks recently installed detour signs directing pedestrians to another path further up the hill. 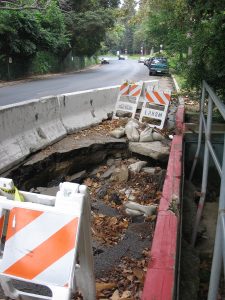 Since the entirety of Griffith Park is a Historic-Cultural Monument, FoGP and our preservation consultant Nicole Possert of The Arroyo Guild met with the Office of Historic Resources to seek input from OHR’s program manager, Lambert Giessinger. We presented historic and current photos to Giessinger who recommended an engineering evaluation to determine whether the bridge could be repaired.

FoGP also met with Councilmember David Ryu in March to familiarize him with the significance of Fern Dell, studies the organization has prepared including The Fern Dell Report, and priority projects. Ryu was impressed by the work and financial support FoGP has invested in Fern Dell and is supportive of the bridge repair efforts since this is a public safety issue. Ryu is committed to providing liaison to help get the project over any hurdles it may encounter.

After Rec and Parks granted permission to examine the bridge, a team of consultants poked and prodded to determine the current condition. Could the bridge be salvaged or would it require rebuilding? Structural engineer for preservation projects, Mel Green, and Frank Parrello, a preservation planner conducted their examination with the assistance of preservation contractors from California Waterproofing & Restoration and our lead consultant Nicole Possert. These well-known, highly respected preservationists began with a visual inspection, removing several deck planks to determine the extent of wood rot. This also allowed access to test the condition of the log supports below the deck planks. GB Geotechnics used ground-penetrating radar on the concrete piers. The area around the piers was excavated to evaluate the foundation and load-bearing tests were performed on the bridge. Finally, architectural drawings of the bridge were created using a 3D scanning methodology.

The written report concluded the center support log is rotted and needs replacing but the exterior logs are in good condition. The non-historic material – the decking and current railings –  need to be replaced with a more historically-compatible design and materials. Since the existing concrete piers were originally constructed with rebar and solid foundations, they are fine.

On April 27 FoGP and our consultants met with Rec and Parks Griffith Superintendent Joe Salaices, head of construction Dave Takata, and environmental specialist Paul Davis to discuss the engineering evaluation and develop a plan of action. Green presented the findings and analysis. FoGP consultants described the proposed repairs, and the concept to repair the railing to be compatible with the Park-Style design featured in many Fern Dell historic photos.

Based on the report, Takata confirmed the bridge could indeed be repaired. This is good news; in the past when bridges failed or a new bridge was required, Rec and Parks would purchase prefabricated bridges, which rarely complement the character of a park, due to high costs of engineering a new bridge.

FoGP is currently hiring a preservation architect and developing conceptual plans along with a cost estimate. This information will begin the internal process with Rec and Parks’ Capitol Improvement Group, the Office of Historic Resources, and the Rec and Parks Board of Commissioners.

So, is funding available and adequate for the repair? Yes! Rec and Parks already has an account earmarked for the bridge. The Griffith J. Griffith Charitable Trust has donated a matching amount to Friends of Griffith Park for bridge repairs. We’ll soon have more accurate cost estimates but are hoping the current funding is sufficient. FoGP has paid for the research and analysis and will provide the design, plans and cost estimates. Working in partnership with Rec and Parks we can get the job done.

We can’t wait until walkers, baby strollers, and dog walkers can safely use the bridge again. All those enjoying a walk in the cool of Fern Dell under the bridge will be able to look up and again admire the graceful curve of the arch of the bridge and the classic criss-cross railing. Stay tuned for more updates in the future!