You are at:Home»Current Events»An Aerial Skyway to Mt. Lee in Griffith Park: What’s next–a Zipline?
By Kathryn Louyse on October 5, 2018 Current Events, in the news 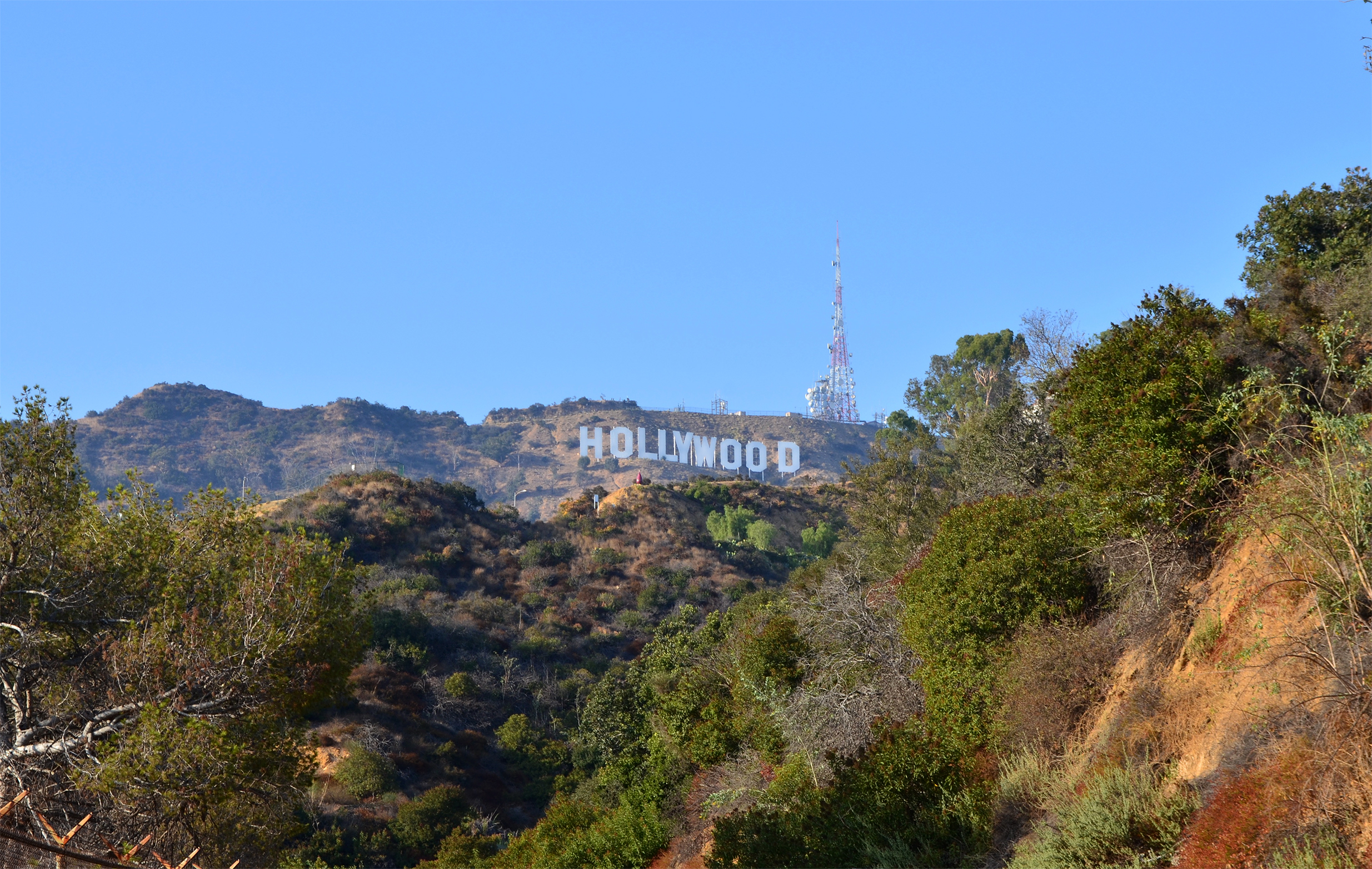 48.3 million visitors flocked to Los Angeles last year. According to city officials and business interests, the goal is to lure 50 million tourists to L.A. by 2020. The tourists bring money to spend and ideas about what they want to see. In recent years, one of the must-see attractions has been the Hollywood Sign. Its nine letters are perched near the top of Mt. Lee, which is in Griffith Park.

In his book, The Hollywood Sign, (Yale University Press, 2011) Leo Braudy writes: “So many storied places are a letdown when they are finally seen. Hollywood and Vine is just an ordinary street corner….But the Hollywood Sign still delivers…To photograph it or see it enhances your sense of self like seeing a movie star.” In pursuit of this sense-of-self-enhancing experience, however, tourists swarm through hillside neighborhoods south and west of the Park, resulting in traffic snarls and occasional vandalism that leaves local residents gnashing their teeth and looking for ways to shift the ravening hoards somewhere else. Why not Griffith Park? Hardly anyone, anyone human that is, lives in the Park.

Los Angeles City Councilmember David Ryu, whose district (CD 4) includes Griffith Park and Los Feliz, commissioned a study by Dixon Resources Unlimited, a transportation consulting firm out of San Diego. The Dixon Report was created after two meetings with community “stakeholders.” The Sierra Club was not included. Among many recommendations, the Dixon Report’s Strategy #3 is to “supplement the Griffith Park circulation system with an aerial tram.” The report claims that an aerial tram and viewing platform for the Hollywood Sign would “likely decrease neighborhood congestion by becoming the optimal viewing point and experience.” But a project of this magnitude would be complicated and costly.

Enter Warner Bros., the studio giant headquartered in Burbank. On July 10 the local CBS News affiliate commented on an article in The Los Angeles Times which revealed that Warner Bros. had met with L.A. City officials to inform them of its proposal to fund a one-mile tram from a studio parking lot up to Mt. Lee. Warner Bros. has given the name “Hollywood Skyway” to their aerial tram and has observed that, “Because of our property on Forest Lawn Drive, Warner Bros. has one of the shortest and most direct routes to the back of the Hollywood Sign.” Yes, the back of the Hollywood Sign. One wonders whether this ride, decanting customers onto an area in back of the sign would do much to relieve congestion in neighborhoods south of Griffith Park because it is from that angle (south) that tourists can get the full frontal view of the sign they want in their photos.

Nonetheless, Warner Bros. may have cooked up a clever way to compete a bit with nearby NBCUniversal’s film studio/theme park behemoth. In 1964, a studio tour was established at Universal. It included dressing room walk-throughs and peeks at actual production. Later, staged events were added and, from these, a full-blown theme park evolved. High-tech rides now overshadow motion picture production. Such attractions as The Wizarding World of Harry Potter, which opened in 2016, and the yearly Halloween Horror Nights—promoted as “Southern California’s scariest, most intense event”—might be impossible for Warner Bros. to duplicate at their Burbank lot. But why even try? Warner Bros. offers a standard studio tour, which the website claims “offers a glimpse behind the scenes of one of the oldest and most popular film studios in the world.” One attraction, “A Festival of Frights: Horror Made Here,” features mazes and authentic props from iconic Halloween movies. Warner Bros., then, depends more on its film-making history to attract visitors. Linked to this is the history of Hollywood movies in general. An aerial whoosh to the Hollywood Sign in Griffith Park would seem an appropriate addition to a journey down motion picture memory lane. (NBCUniversal offers lots of jazzy rides, but none quite like the proposed “Hollywood Skyway.”)

So Warner Bros. foots the bill for the Skyway. The studio adds a new tourist attraction and eventually makes the money back by charging plenty for the ride. The City of L.A. gets a piece of the ticket fees. Traffic congestion in the Hollywood Hills decreases—maybe. Problems solved? Maybe not. “The Skyway proposal does not recognize the importance of providing local public access to the park for hikers and local residents,” points out the organization, Friends of Griffith Park. Their primary concern, as well as that of the Sierra Club Angeles Chapter, is to maintain the existing free public access to Griffith Park while protecting the sensitive wilderness areas.

Indeed, the Sierra Club Angeles Chapter Executive Committee adopted a resolution in August of this year to oppose “the recent proposal by Warner Bros. Studio to build an aerial ‘skyway’ to take riders from its property in Burbank to the top of Mt. Lee in Griffith Park behind the Hollywood Sign, and to also oppose other proposed aerial trams into or within the Park.” Three Angeles Chapter entities—the Griffith Park Section, the Central Group and the Verdugo Hills Group wrote the original resolution—subsequently approved by the Chapter Conservation Committee and then by the Chapter Executive Committee. Environmental concerns are key to the Chapter’s opposition to an aerial skyway to Mt. Lee or to any other venue in Griffith Park. The combination of crowds of visitors and the infrastructure required for them and for the aerial tram itself would add pressure to already stressed habitat and its wildlife. Adding swarms of humans, including ones with little experience of wilderness areas, would likely result in litter, accidents, noise and increased fire risk in the Park. (In 2007 the Griffith Park fire came close to the Hollywood Sign. Its natural setting, often replete with dry brush, makes fire a constant threat.)

In his book, Braudy mentions that, in the early years of this century, the sign was viewed “as a ‘soft’ terrorist target by Homeland Security….it was even said that the Madrid commuter train bombers had images of the sign, along with Disneyland, on their laptops.”

The sign’s fame, along with recurrent efforts to commercialize parts of the Park pose a constant challenge to Colonel Griffith’s vision of the Park as a peaceful oasis for residents and visitors to reconnect with nature. In 1896, Griffith donated the Park to the people of Los Angeles as “a place of recreation and rest for the masses.” The largest natural wilderness within the City of L.A., Griffith Park contains a diverse ecosystem that hosts a substantial number of native plant and animal species that rely on it to survive. Park residents include the iconic urban mountain lion, P-22. The Park is designated a Significant Ecological Area by the County of Los Angeles General Plan and a wildlife corridor linking the Santa Monica Mountains to the Verdugo Mountains. It is considered one of 34 biodiversity hotspots for conservation worldwide by Conservation International. Surely the flora and fauna of Griffith Park’s urban wilderness deserve special consideration whenever they are threatened.

Because the Park’s hilly core is difficult to develop and commercialize, plans for aerial trams have popped up regularly—at least since the late 1960s, when a scheme by a well-known television producer and others sought to construct an aerial tram that would have transported patrons to a revolving restaurant atop Mount Hollywood. A 2005 draft of a Griffith Park Master Plan included two proposed aerial trams. The Plan was widely criticized for how it would despoil and commercialize the Park. The Griffith Park Master Plan Working Group, created in response to that Plan, insisted that the Park should maintain its urban wilderness identity.

However: Plus ça change, plus ç’est la même chose, as we say in the environmental movement (especially in France). On September 26, the Arts, Entertainment, Parks and River Committee of the Los Angeles City Council agreed to move forward with feasibility studies of an aerial tram, visitor center and other changes to the area around the Hollywood Sign. A joint report from the office of the Chief Legislative Analyst and the Department of Recreation and Parks found 20 out of 29 of the Dixon Report’s recommendations feasible. One of these was an aerial tram from a location within the Park: the Wilson/Harding Golf Courses, the L.A. Zoo or the Martinez Arena. (What hardships might a transit hub serving crowds of tourists visit upon golfers, zoo animals or equestrians and their horses? Should traditional park users be disrespected in order to pull in more tourist dollars?

This brings us to the issue of environmental justice. Events such as the Haunted Hayride inconvenience hikers, bicycle riders, equestrians, picnickers and other traditional Park users, and they do much more harm to the resident plants and wildlife. Col. Griffith meant the Park to be free and accessible to all. Converting a free, open and wild section of the Park into an attraction only available to people with the means to purchase tickets chips away at the communal abundance of the Park, a public space intended for all of us to enjoy free of charge.

Once an aerial tram is in place, whether it stops at Mt. Lee or at a viewing platform somewhere, what will follow? Up to now much of the hilly heart of Griffith Park has been saved from commercial exploitation because it is difficult to access by anyone unwilling or unable to hike or ride a horse or a bicycle up to the higher and wilder portions of the Park. A tram can change this. The zip line mentioned in this article’s title could whisk daring visitors over the sign. A morbid thrill ride could require hooking up to a cable, climbing up a ladder to the top of the “H,” jumping off, plummeting almost to the ground, and then whizzing some hundred feet down the steep hillside. It could be called the “Suicide Swoop,” after the young actress who is said to have lept to her death from the Hollywood Sign’s first letter in 1932. (Her death was tragic, and my suggestion is in poor taste but perhaps no worse taste than that of some of the events at the Haunted Hayride.)

Finally, in park-poor Los Angeles, what is needed more—another theme park ride or open space? Edward Reed, Associate Professor of Psychology at Franklin and Marshall College, said, “there is something wrong with a society that spends so much money, as well as countless hours of human effort—to make the least dregs of processed information available to everyone everywhere and yet does little or nothing to help us explore the world for ourselves.” (Quoted in Richard Louv, Last Child in the Woods: Saving Our Children from Nature Deficit Disorder, Algonquin Books, 2006.) We are losing the ability to explore our world directly as experience is increasingly monetized and curated by corporate flacks. Urban kids and many suburban children have long been isolated from the natural world because of a lack of neighborhood parks, or lack of opportunity, observes Louv.

In the middle of Los Angeles we have a huge urban wilderness. It deserves our respect and our protection. “In our bones,” writes Louv, “we need the natural curves of hills, the scent of chaparral, the whisper of pines, the possibility of wildness. We require these patches of nature for our mental health and our spiritual resilience.”

Carol Henning is a Sierra Canyon member and has hiked Griffith Park for many years.