You are at:Home»Current Events»Author Beth Pratt-Bergstrom at Skylight Books
By Kathryn Louyse on February 11, 2017 Current Events, Save the Date 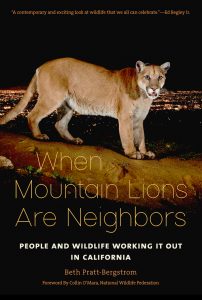 Friends of Griffith Park is proud to announce – Beth Pratt-Bergstrom will be speaking about her recently published book “When Mountain Lions are Neighbors” at Skylight Books in Los Feliz on Friday, March 24th at 7:30 pm. Her book and many of her talks revolve around the remarkable journey undertaken by mountain lion P-22 who crossed two freeways and heavily-urbanized landscapes, ultimately arriving in the largest urban wilderness in the United States.

Currently Beth is involved with bringing the plight of animals isolated by freeways, often becoming vehicle-involved victims as they attempt to cross. One project Pratt-Bergstrom is working on – construction of a wildlife crossing bridge near Liberty Canyon in Agoura Hills. The plight cannot be emphasized enough as two mountain lion deaths recently occurred along the 118 Fwy when P-39 and one of her three kittens were killed within weeks of one another.