You are at:Home»Events»P-22 Day is Coming! 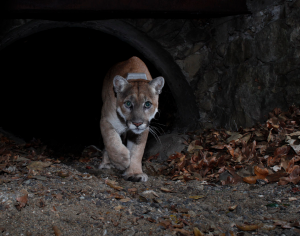 SAVE THE DATE / plan to attend and bring the family
Sat., Oct. 19, 2019 from 11 AM to 5 PM
Festivities will take place at Park Center
(across from the Ranger Station Auditorium on Crystal Springs)

We’re celebrating the big guy’s trek down and across the Santa Monica Mountains ending with his foray into Griffith Park in 2012 where he was identified and the National Park Service was alerted. Since his entry, he’s been a really good neighbor, mostly keeping to himself during the day when the Park is filled with visitors.

Getting to the Park was quite a feat, and for those who haven’t heard the story… P-22 crossed the 405 and 101 freeways on his journey to find a territory where he would be safe, and have to access sufficient food sources (his favorite is deer although he’s known to have munched on other species as well).

Griffith Park fits the bill nicely for our resident puma. P-22 is protected to a degree even though a normal territory would be upwards of 250 square miles for a male mountain lion. Not only has he managed to make Griffith Park his home, he also stars in a film called The Cat that Changed America, designed to bring attention to the plight of wildlife in urban settings.

Park Center across from the Ranger Station in Griffith Park