You are at:Home»in the news»Friends of Griffith Park prepares quick response to Forest Lawn Hollywood Hills Draft Environmental Impact Report
By Kathryn Louyse on December 27, 2014 in the news 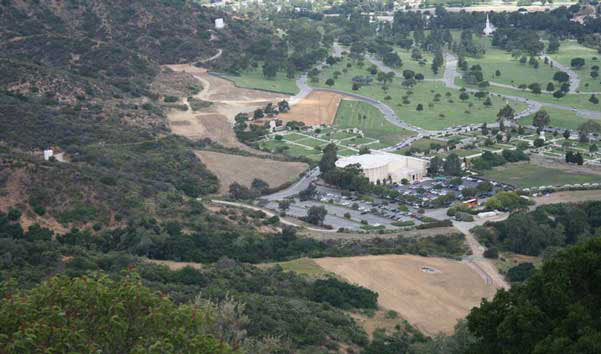 Many Griffith Park users may be surprised to learn that much of the open space that buffers the park is currently at risk. Joining the massive NBC Universal development proposal (now in its EIR stage), another Griffith Park neighbor is embarking on an expansion that will eliminate much of the remaining space on the park’s northwest border…not to mention breathing room for the communities of Toluca Lake and greater Los Feliz. Friends of Griffith Park is monitoring both projects and recently filed comments on Forest Lawn’s Draft EIR.

November 2008: The L.A. planning department invited interested parties to a meeting regarding Forest Lawn’s massive expansion plans for its cemetery contiguous to Griffith Park. After expressing the desire to be a good neighbor to the park, cemetery representatives unveiled a proposal adding 200,000 new interment spaces to their 444-acre site, nearly doubling the total capacity for the facility and bringing it to maximum capacity.

In response to the hope expressed that enlightened interment practices might be considered to avoid the adverse environmental impacts that would inevitably result, Forest Lawn staff stated that the company is committed to servicing and upholding the traditional cultural and religious burial rites their clients expect. This translates to water-thirsty lawns and above-ground crypt structures, packed densely onto the facility’s remaining undeveloped acreage.

February 2011: Two years and three months later, the Draft Environmental Impact Report (DEIR) for the expansion was released. As with all such documents, a very short time was set aside for public comment. Friends of Griffith Park joined others in asking for an extension and received another 15 days, but with the DEIR encompassing thousands of pages, it was still necessary to work quickly to formulate positions on multiple aspects of the proposal. Our response letter focused on the adverse impacts resulting from removal of the extraordinarily rich and mature native habitat directly bordering the park, including 632 protected coast live oak trees and 144 protected Southern California black walnut. Many rare plants, including mariposa and Humboldt lilies, will also be sacrificed under the proposed plan. Sennett Creek, whose waters come from natural seeps within Griffith Park, cuts through the Forest Lawn property and connects the Park to the L.A. River. In addition to core loss of rare, pristine riparian habitat, wildlife corridor functionality will be affected adversely.

Responses from both the State of California Department of Fish and Game and the Santa Monica Mountains Conservancy affirmed our views. These agencies pointed out that there is no satisfactory mitigation for the demolition of mature, protected species. Replanting at a different site does not replicate the complex plant community that has been lost, nor does it address the destruction of the wildlife-nurturing habitat the community provided.

Forest Lawn is required to propose development alternatives and has presented four alternate approaches to its preferred project plan. Friends of Griffith Park has recommended the best of these alternatives – the option with the least impact on Griffith Park. We believe that almost all of the company’s business goals can be accomplished by its modest scale-back of its intentions, while protecting most of the sensitive habitat that would be otherwise destroyed. We remain hopeful that Forest Lawn will remain true to their originally stated goal of being a good Griffith Park neighbor and look forward to seeing the completed EIR.

photo: View of Forest Lawn Hollywood Hills taken from an overlook in Griffith Park. The denuded land was scraped and excavated based on a conditional use permit dating to 1948. Besides building mulltiple new structures, additional native habitat is expected to be bulldozed under the current proposal favored by the cemetery company.