You are at:Home»in the news»Griffith Park Fire – Ten Years Later
By Kathryn Louyse on July 1, 2017 in the news, Preservation 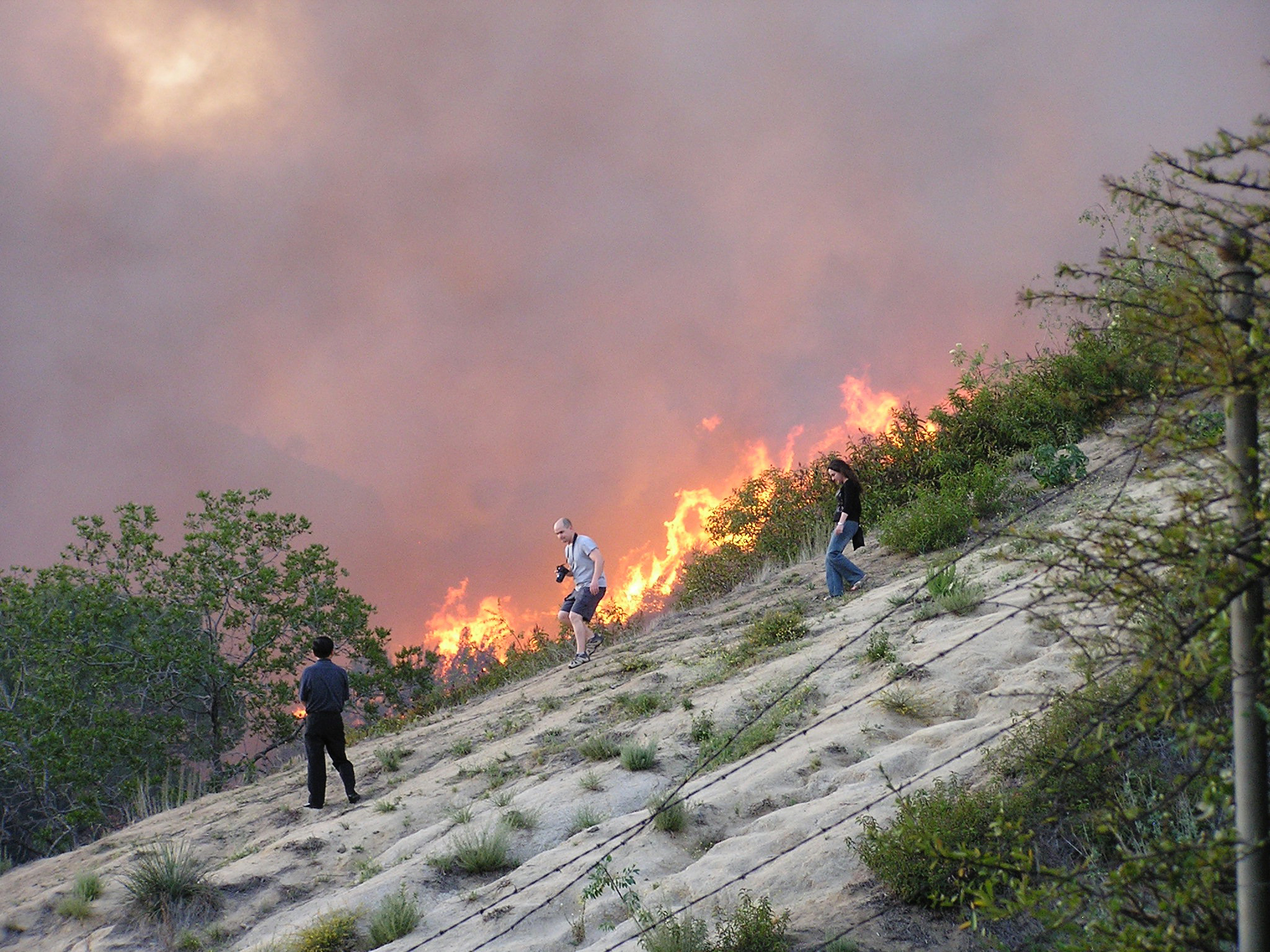 Griffith Park looked very different ten years ago. On May 8, 2007 a brush fire broke out in the park near the tennis courts. While there are frequent small fires in the park, this one was different; strong winds carried the fire all the way to the historic merry-go-round. Then the wind shifted and the fire headed southwest towards the residential areas. More than 300 homes in Los Feliz were evacuated. Thanks to the rapid response of LA Fire Department and mutual aid from several neighboring communities, the fire was kept out of the residential area with the exception of damage to one roof.

Griffith Park itself was not so fortunate; 817 acres of chaparral burned to the ground. The park looked like a barren lunar landscape from the Griffith Observatory and the Greek Theatre east to the merry-go-round.

Then-Recreation and Parks (RAP) General Manager Jon Kirk Mukri wisely organized a team of fire recovery specialists to assess the damage and plan for recovery. The team included not only numerous city agencies but LA County Fire Department, the U.S. Department of Agriculture (USDA), the US Forest Service, the National Park Service, CA Dept. of Fish and Game, LA Conservation Corps, and the University of California. The Griffith Park Fire Recovery Team’s goal was to develop a fire recovery plan that was science- and data-based. The first order of business was to clear roadways of debris and hazardous materials and evaluate environmental damage.

The USDA Natural Resource Conservation Service assisted the city by creating a fire intensity map from aerial photos of the burn area to identify the impact of the fire on soil productivity, wildlife, and infrastructure. Biologists took soil samples from different locations throughout the burn area. They found lots of seeds there just waiting for some rain to fall to make them sprout. Scientists determined that the chaparral and mixed scrub plant communities would likely recover on their own over the next ten years.

While scientists were analyzing and strategizing, Mother Nature was already hard at work. Chaparral plants have evolved to thrive in our Southern California conditions of drought and fire. Laurel sumac sometimes has a bad reputation because it is so flammable, but it also has deep roots in order to survive our long hot summers. This attribute makes it a good plant for erosion control. Within a month after the fire the charred sumacs already had a foot of bright green new growth, a welcome sign in the sea of gray ash.

There was another welcome sign. The fire burned all the brush that had accumulated in the catch basins built by the WPA during the Great Depression. These elegant stone structures had been concealed beneath a dense growth of brush. To restore them to functioning catch basins, RAP immediately cleaned out the decades of debris that had accumulated behind the walls.

A major concern after a fire is erosion control. Without plants to hold the soil in place a little rain has the potential to wash tons of mud downhill, wash out roads and trails, and pour into residential areas. A heavy-duty helicopter was brought in to spray the burn area with hydromulch, which forms a protective layer over the soil, absorbing rainwater and preventing the buildup of water in the burnt soil area that could lead to landslides. Because it had already been determined that there were plenty of native seeds in the soil, no seeds were added to the hydromulch when it was applied.

All of their analysis, preparation, and hard work paid off. Erosion damage within the park was reduced to a minimum and there was no mud flow damage in the surrounding neighborhood. Scientists predicted chaparral in Griffith Park would recover on its own in ten years. It’s been ten years now. How do you think Mother Nature is doing?

The first day of spring 2009, just two years after the fire, the steep slopes of the park were covered with a profusion of wildflowers. A preliminary study done by Cooper Ecological Monitoring, Inc. five years after the fire revealed the chaparral was recovering well. The area north of the tennis courts, where the fire started, had recovered. Throughout the burn area grasses, wildflowers, shrubs like laurel sumac, deer weed and toyon had returned. One advantage of fire is that it clears the ground to give rarer plants like eucrypta a chance to resprout. A disadvantage is that invasive nonnatives like tumbleweed and castor can take over a denuded area. The native coast live oaks, black walnut, and Mexican elderberry were coming back. The charred slope below Dante’s View was carpeted with native coast buckwheat, California sagebrush, and black sage. All Mother Nature needed was a little more time for the vegetation to reach full size.

Today, ten years after the fire, Griffith Park is thriving once again. Its native plants bided their time during the drought years. With last winter’s good rainfall they have sprung to life with enthusiasm. It’s a natural cycle that repeats itself again and again in California.

Even as park recovery continues, several beetle infestations are raising serious concerns about the ongoing health of trees in Griffith Park. FoGP continues to follow the story with interest, and is helping to plant trees which will aid in the long recovery.