You are at:Home»Current Events»Griffith Park’s 1933 Fire
By Kathryn Louyse on December 23, 2017 Current Events, in the news 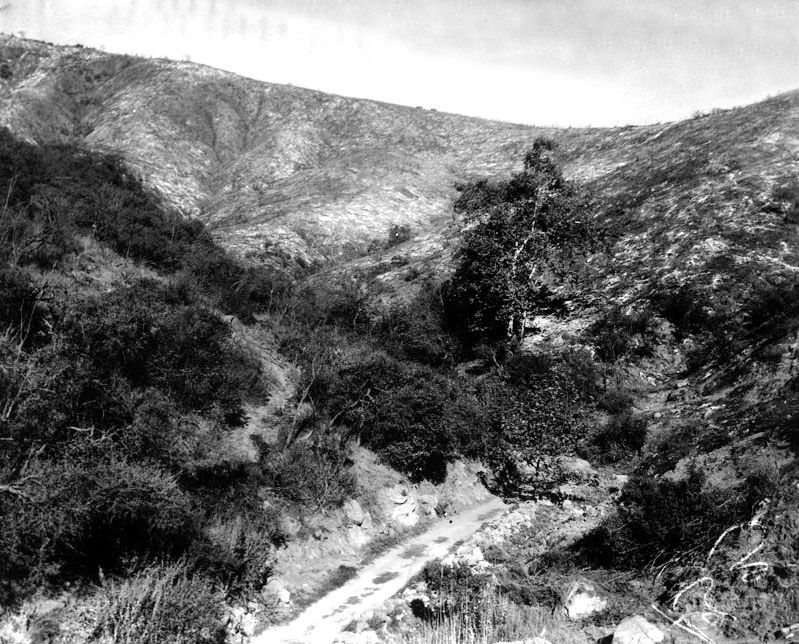 Friends of Griffith Park is privileged to have speakers on a variety of park-related topics. This past August, our guest speaker was Mike Eberts, author of “Griffith Park: A Centennial History” who discussed impacts of the 1933 fire.

Today, various firefighting techniques are employed to quickly knock down flames, but in Griffith Park’s 1933 fire, the simple shovel was the tool primarily utilized by workmen enlisted to fight the fire. Sadly, due to their inexperience, approximately 150 men were injured, and at least 29 perished in the deadliest LA fire, pushed by winds through deep brush-filled canyons.

Published records from the time, stated that more than 3,700 relief workers were involved in various activities throughout the park when the fire broke out. Workers were usually divided into smaller squads and depending on experience, tasked with brush clearance, road- and bridle-path building, planting, or dam construction. The vast number of laborers in the park was a response to the widespread depression still gripping the country as men were forced to work for less than a dollar a day, and glad to have the opportunity.

The morning of the fire started out innocuously, but by mid-afternoon the temperature had heated up considerably when Park Superintendent Frank Shearer became aware of smoke emanating from a small area in the Mineral Wells Canyon. Shearer raced toward the fire, while city landscape engineer Fred Roewekamp headed down to the golf clubhouse to raise the alarm. As Shearer got close to the flames, he engaged some park workmen in the immediate area to help extinguish the fire, but by then it had exploded upwards, into the tree canopy.

Author Mike Eberts described the aftermath of lives lost. “The bodies were laid in a row on a concrete floor under a huge canvas shroud. Most were so badly burned that they could not be identified, except by their belongings, which were kept in an old apple crate. This odd, macabre little collection of trinkets included two inscribed belt buckles, a high school class ring, a chauffeur’s badge, a Ford ignition key, a collapsible cup, a little square glass bottle, a blue sunglass lens…” Later, individuals were identified by personal items: a class ring helped identify Roy Brown. Others were identified by dental records, but some were transient and remained unidentified.

Recently I spoke with Leonard Loa, son of John Loa who in 1933 was on one of the work crews when the fire broke out. Like many day laborers of the era, the 21-year-old Loa was sent to Griffith Park to help clear brush. Leonard remembers his father talking about the experience of being so close to the flames that his clothes were burning and his shoes were practically melting from the heat. But Loa was one of the lucky ones who survived while others sent in another direction to fight the conflagration were killed.

Photos from top: Charred hillsides mark the path, and devastation of the 1933 fire. One of the bodies recovered is escorted down a slope in Griffith Park. In 2004, John Loa is honored by then CD 4 Councilman, Tom LaBonge for his role in the 1933 fire (photo credit: Kristin Sabo). Golfers enjoy the front lawn of the Griffith Park clubhouse, circa 1930. Unfortunately, this building was destroyed in the 1933 fire.