You are at:Home»Current Events»Let’s eliminate the poisons that are KILLING OUR WILDLIFE!
By Kathryn Louyse on March 29, 2019 Current Events, in the news 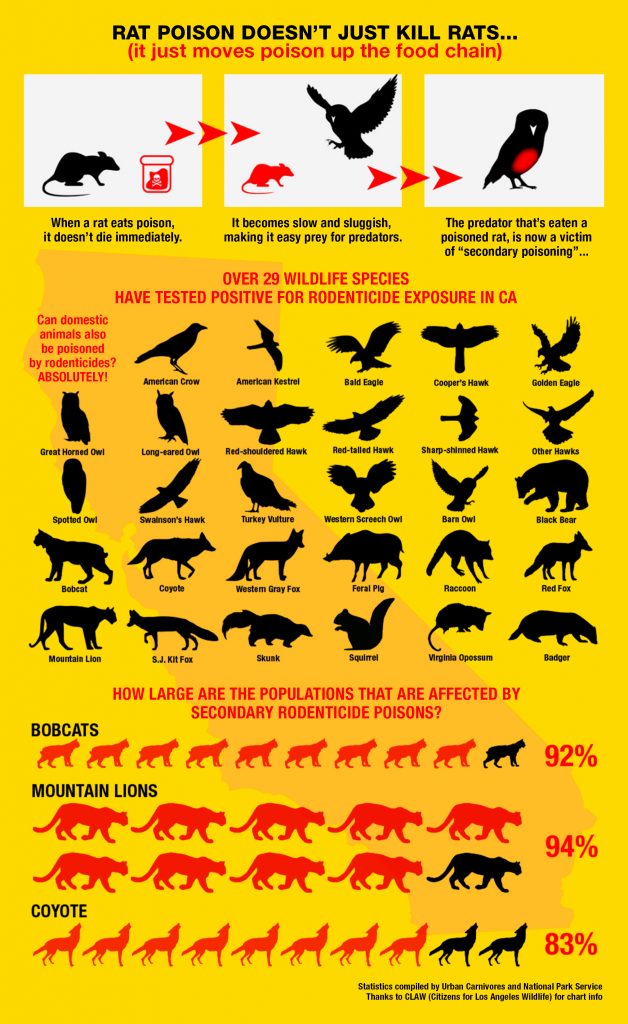 CA Rodenticides Bill AB 1788 has passed the first committee
…but your comments are still needed as this bill is now going to the next committee!

A bill to ban the worst of the rat poisons has passed it’s first hurdle, the Environmental Safety and Toxic Materials, and is slated for presentation at the Water, Parks and Wildlife Committee.

AB 1788 will ban the most toxic rodenticides, the “second-generation” anticoagulant rodenticides, with exceptions for some agriculture and public safety emergency usages. These potent rodenticides inadvertently kill owls, hawks, bobcats, coyotes, and mountain lions as the poisons move up the food chain.

Two previous bills to restrict the use of some rat poisons in California failed because of lobbying efforts by agricultural interests.

This time, let’s not allow this to happen. We need you to send emails of support for AB 1788.
Read more here.

Even if you’ve already sent a comment to the previous committee, you should STILL voice your support for AB 1788 since it is now before a new committee which hasn’t seen it!

The California Assembly requires that all support letters be submitted through the Water, Parks, and Wildlife Committee online portal (there is button on the right side to “submit position letter”). You will have to create a login for this, but it is fairly simple and easy to do!

Take a moment to show your support! It’s NOT JUST California wildlife that’s depending on it… it’s also our future generations!

WILDLIFE CHART compiled by Urban Carnivores and NPS. Thanks to CLAW (Citizens for Los Angeles Wildlife) for info