You are at:Home»in the news»Our Tree Climbing Gray Foxes
By Kathryn Louyse on December 13, 2018 in the news, Preservation 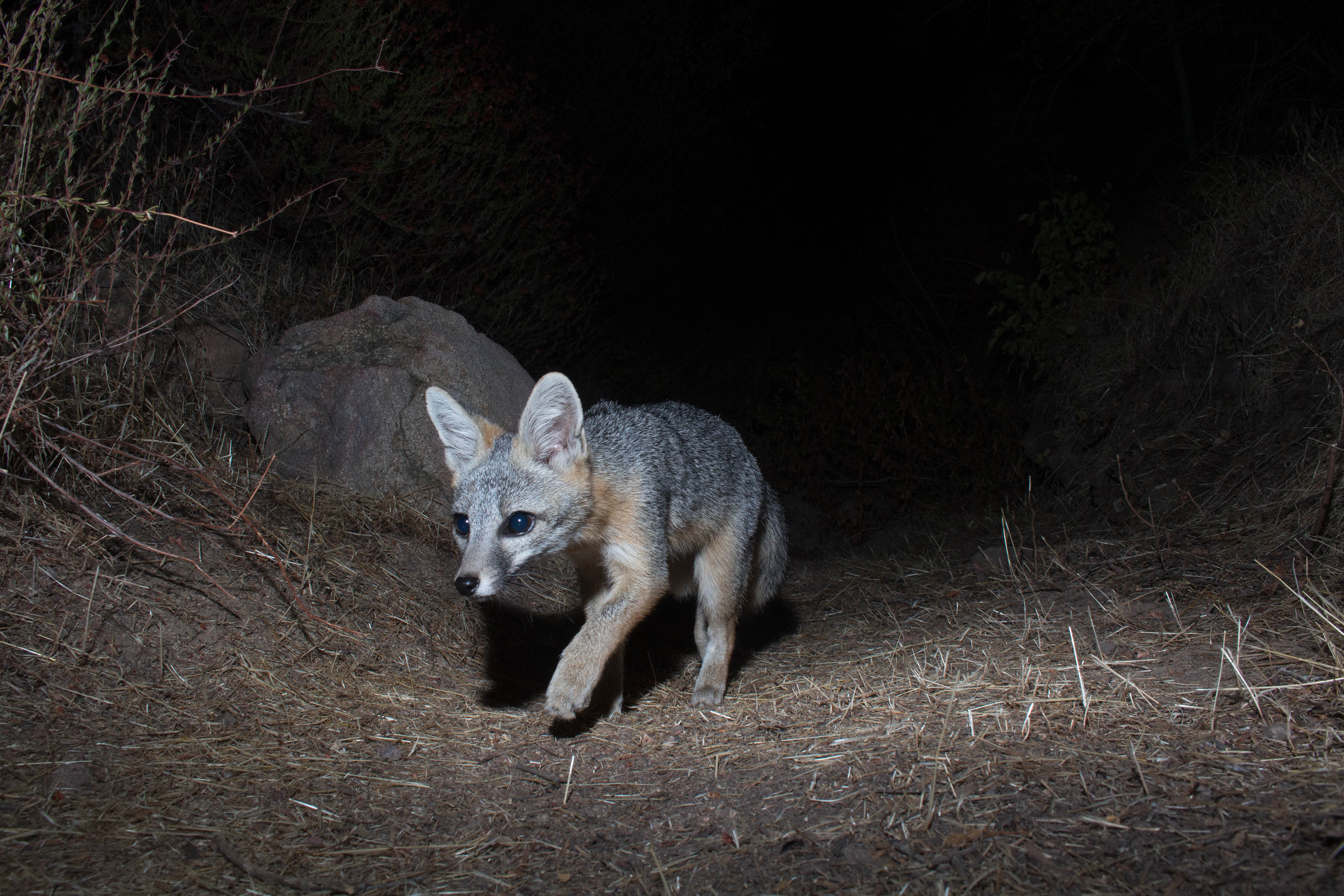 As elusive as P-22, Western gray foxes are rarely seen in Griffith Park. One of the earliest studies, as part of the continuing Griffith Park Natural History Survey in 2007, confirmed tracks in the Old Zoo. Later, a bobcat genetics study conducted by carnivore scientist Laurel Serieys and the National Park Service inadvertently trapped a gray fox, rather than the targeted bobcat. Of course, it was quickly released unharmed. Cameras deployed in the Griffith Park Connectivity Study have also turned up foxes, but only rarely. While sporadically documented in the Park between 2007 through 2013, they’ve been very quiet until recently. Now we have evidence showing they’re successfully breeding in the Park.

For the first time ever, I was luckily treated to a five-second sighting of the reddish and gray, long and bushy-tailed critter crossing a trail in July during the morning hours. Near the same area, I noted curious scat, not similar to recent coyote scat which is common on most trails. This scat was loaded with an amazing quantity of red berries, some not well-digested. On a following hike, I discovered that Eastwood manzanita, an important species of a special plant community on the northern slopes of the Park, was providing the apparently coveted red fruit to our gray foxes.

Gray foxes are omnivores. They are thought to consume a good amount of vegetative food, especially berries when available. Fortunately for foxes, berry season stretches over a wide period in Griffith Park, with currants, gooseberries, cherries, red berries, manzanita-berries, and succulent elderberries, all ripening largely out-of-sync ­with each other! Foxes also patrol the Park for rodents and rabbits, and are known to hunt birds, and even snack on insects. Now, that’s a well-rounded diet.

How do they get to the elderberries that are found high in the branches of the elderberry tree? No problem for the gray fox which has an extraordinary adaptation for climbing, unlike its red fox cousin. In fact, gray foxes are the only canid (dog family) species in North America proficiently arboreal. (The only other in the world is the Asian raccoon dog.) A gray fox can gracefully scale vertical trunks and go high into trees. An inwardly articulating joint of its forelegs, matched with hooked claws, give the gray fox a tree-climbing edge. It’s also a nice adaptation to escape being nabbed by coyotes, thought to be the fox’s main predator. Gray foxes sometimes make their dens in hollow portions of trees where they can safely raise their offspring, away from hungry coyotes.

The genetic health of many mammal species, including the Western gray fox, bobcat, Western gray squirrel and mountain lion, is the foremost topic of concern by scientists studying fragmented habitat areas.

We need to provide increased connectivity between habitats to assure that these beautiful creatures can survive and thrive in our urban setting.