You are at:Home»Current Events»Taking a Firm Stand… Beachwood Judgement Handed Down
By Kathryn Louyse on July 2, 2017 Current Events, in the news 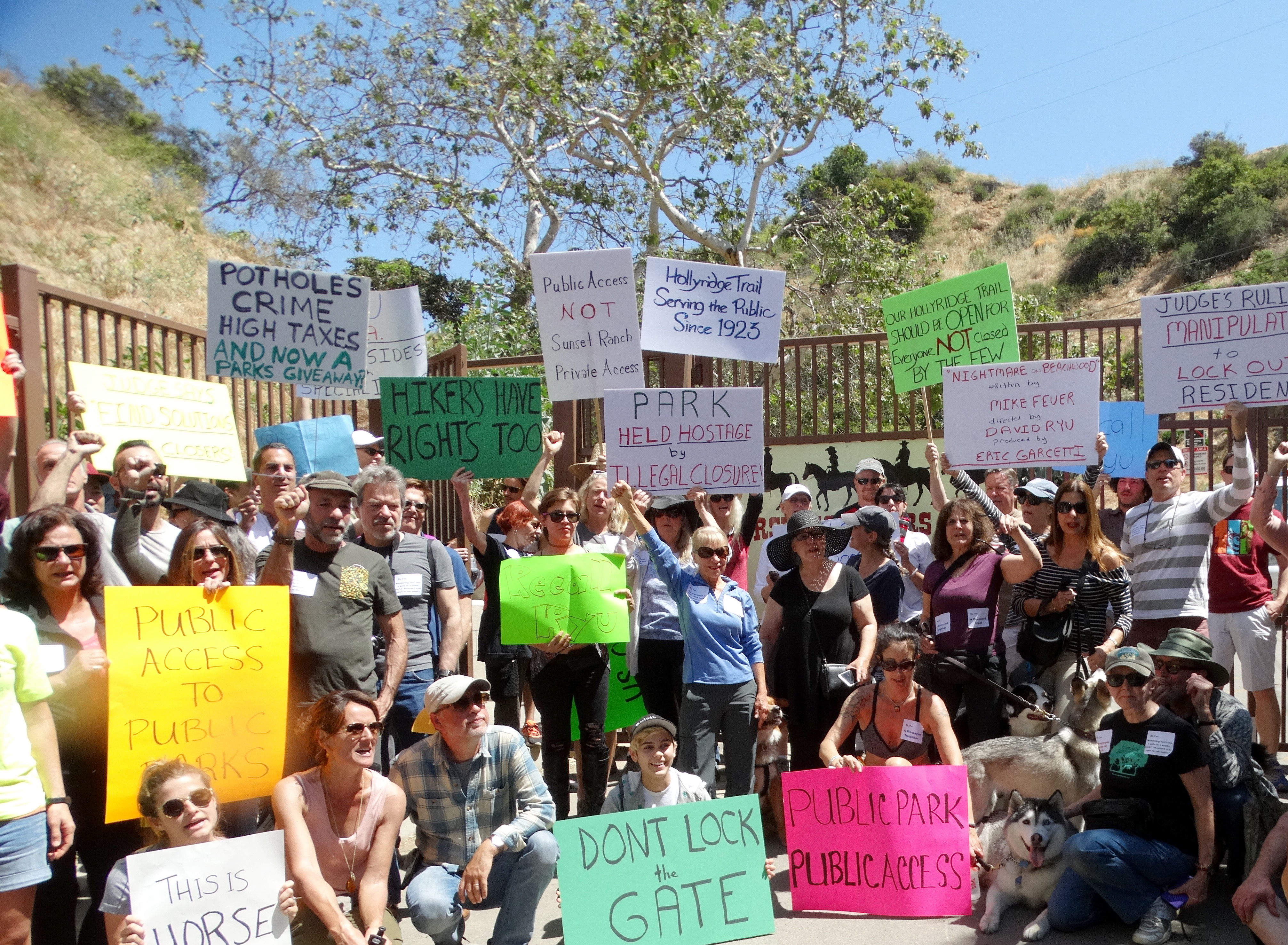 Friends of Griffith Park, Griffith J. Griffith Charitable Trust, and Oaks Homeowners jointly filed a Motion to Intervene (MOI) in the Los Angeles Superior Court case, Sunset Ranch Hollywood Stables vs City of Los Angeles, this past May 1st. The filing challenges the decision made by the City of Los Angeles on March 13th to completely close access to the Hollyridge Trail from Beachwood Canyon, in response to a Court Order on February 3rd. The Hollyridge Trail via Beachwood Canyon provides an easy and short route to a fantastic view of the Hollywood Sign. While it is frequented by many tourists, it is also a regular route for seasoned hikers and local residents of Beachwood. The closure of the trail was effective on April 18th and, according to the City, the closure is permanent.

The news was surprising for various reasons, but mostly because it seems to directly contradict the judge’s actual ruling in the Sunset Ranch case. In this case, Judge Elizabeth Feffer determined that Sunset Ranch does not have an exclusive right to the access road that leads to the trailhead and cannot exclude members of the public from that easement, and that the City must provide public pedestrian access to the Hollyridge Trail at a point “as close as practicable” to the Beachwood Gate. The City’s “Joint Stipulation” with attorneys for Sunset Ranch provides for access from a point “1500 feet away” to the east at Bronson Canyon, as reported to the judge. However, it is actually 2.7 miles away for people, although it’s only 1,500 feet for birds. The two canyons parallel each other closely, but are treacherously deep with a steep ridgeline and Camp Hollywood between them.

The Motion to Intervene is a legal action to gain standing and become additional parties in the existing lawsuit with an interest in the outcome. The reasons for the Motion to Intervene include: the elimination of the access to Griffith Park, a public park, at a much-used access point; creation of a grave public-safety risk in adjoining communities; improper transfer of public land to a private party; and more. The petitioners claim the city misled the court and tried to “stipulate away” rights held by the public for the public good.

The closure of the Beachwood access to the Hollyridge Trailhead creates a dangerous precedent that could lead to the closure of other access points to the park in the future. With strong conviction, the Griffith J. Griffith Charitable Trust joined Friends in the filing since the decision to end pedestrian access to Griffith Park from Beachwood Canyon flies in the face of Colonel Griffith’s stated principle of open access for park patrons.

LA Department of Recreation and Parks General Manager Mike Shull has over the years assured the Park’s adjoining communities that he wants to keep entrances to Griffith Park – specifically the entrance in Beachwood Canyon – open to the public.

Since the closure on April 18th, concepts for allowing Beachwood Canyon access to the park have been proposed. One such plan provides for a very simple opening to the right of the existing gate. The opening would connect to either a sensitively-constructed switchback trail or a pre-fabricated stair system which would lead directly to the Hollyridge Trail, a mere hundred feet away. This seems more in keeping with the judge’s Court Order!

Major trailheads with wide trails or fire roads are important in order to provide the public with safe hiking routes while protecting the park’s rich habitat and wildlife. Hollyridge Trail is one of them.

While global solutions to calm the adverse impacts of tourism to residential areas are seriously needed, closing one of the park’s important access points takes a step backwards and at the same time compromises obvious principles. There is no question much more energy should be spent on such permanent solutions, and FoGP will continue to be involved in the process.

A new lawsuit regarding the closure was filed on Tuesday, July 18, 2017.
http://www.latimes.com/local/lanow/la-me-ln-hollywood-trail-lawsuit-20170718-story.html

An editorial from just before Christmas 2017 talks about the trail closure.
http://www.latimes.com/opinion/editorials/la-ed-santa-naughty-nice-trump-20171223-story.html