You are at:Home»Current Events»LA Zoo presentation of “The Cat That Changed America”
By Kathryn Louyse on September 30, 2017 Current Events, in the news, Save the Date

P22 is Hollywood’s celebrity cat – and this film tells his remarkable story and the efforts of Angelenos attempting to help mountain lions thrive in the Santa Monica Mountains by building the largest wildlife crossing in America. 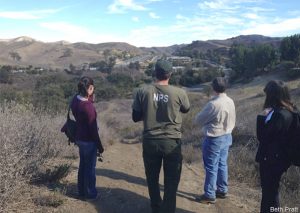 This documentary by Tony Lee and Alex Rapaport recounts the journey undertaken by Hollywood’s celebrity cat P-22 – crossing two freeways (the 405 and 101) as he endeavors to find a safe space in the enormous LA urban landscape. The film also highlights efforts of Angelenos in their efforts to help mountain lions in the Santa Monica Mountains thrive by building the largest wildlife crossing in America. https://thecatthatchangedamerica.com/

Immediately following the film, participants were able to speak with environmental biologists as well as John Lewis, Director of the LA Zoo. This film talks about P-22’s remarkable story and sheds light on the struggles of Angelenos and local conservationists who are battling to help P-22 and other mountain lions survive in this urban landscape. https://www.nwf.org/Save-LA-Cougars/Wildlife-Crossing.aspx

Daniel S. Cooper (A.B., Harvard; M.Sc., UC Riverside) is a doctoral candidate in Ecology and Evolutionary Biology at UCLA and former California Director of Bird Conservation for the National Audubon Society. Dan has been collecting and analyzing ecological data, and communicating findings to resource managers and decision-makers, for the past two decades. He has published more than two dozen peer-reviewed papers on
California natural history, and is the author of Important Bird Areas of California (2004) and Flora of Griffith Park (2015).

Chris DeMarco (B.S. Biology, Principia College, M.Sc., CSULA) examined the genetics of populations of western gray squirrels in the LA area for his Master’s degree. His research has determined that western gray squirrels in Griffith Park are vulnerable to extinction. Currently, Chris teaches as Cal State LA and continues to investigate the decline of this native species.

Gerry Hans (B.S. Biology, University of Illinois) is a founding board member of Friends of Griffith Park and Vice President, Science and Conservation. Gerry helped establish invaluable
scientific work for the park beginning in late 2006, branded as the Griffith Park Natural History Survey. Living near Griffith Park for over 30 years, he treasures its unique biodiversity and advocates for its protection.

John R. Lewis (B.S. Animal Science, University of Louisiana) is the director of the L.A. Zoo. Before his move to Los Angeles, John was the director of the John Ball Zoological Gardens in Grand Rapids, MI for 17 years. He also worked at the Minnesota Zoo from 1977-1986 and began his zoo career in 1974 as Primate Supervisor at the Louisiana Purchase Gardens & Zoo in Monroe, LA. He is an active member of the Association of Zoos and Aquariums (AZA), serving on several committees and task forces; was a member of AZA Board of Directors from 1996 to 2003, and is currently again on the AZA Board of Directors.