You are at:Home»Current Events»The Real Story of Faux Bois
By Kathryn Louyse on July 1, 2017 Current Events, in the news 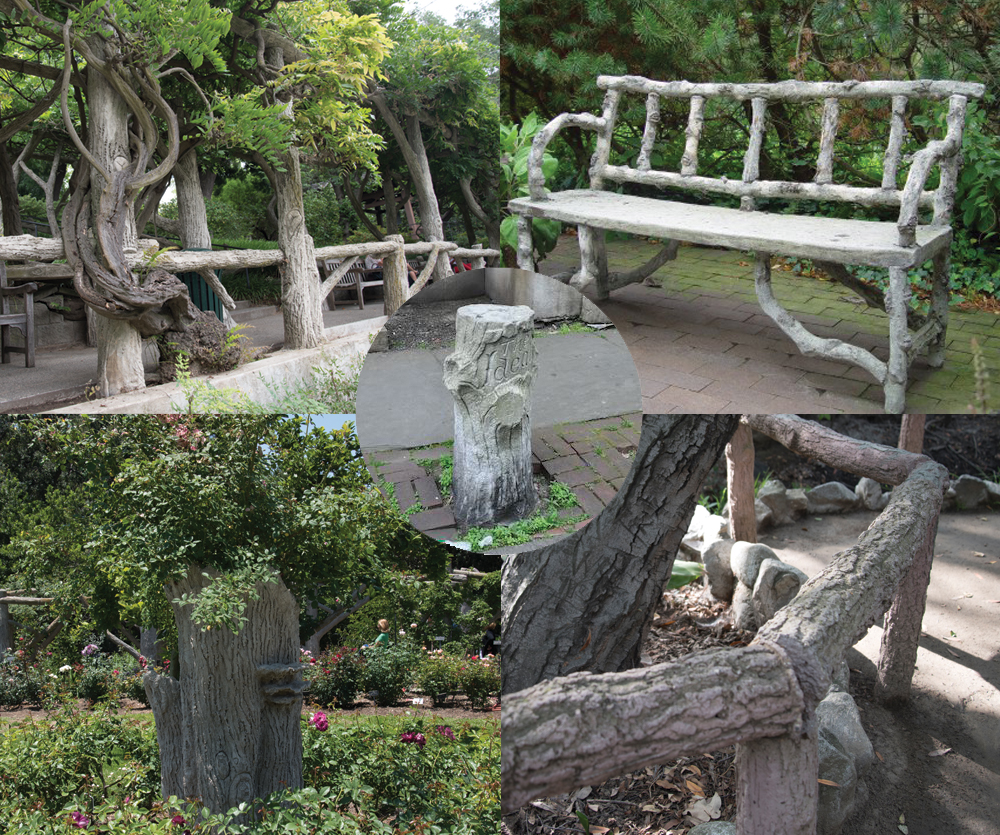 My maternal grandfather never owned a car. A city-dweller, he walked everywhere, including the mile or so to work downtown Monday through Friday during most of the four seasons of Reading, Pennsylvania. He enjoyed walking: sunny side of the street in winter; shady side in summer. Passing every lady on the sidewalk meant a quick tip of his hat, a Panama between Memorial Day and Labor Day and a brown fedora the rest of the year. On his days off, he would walk alone on one of about five various several-mile-long laps through Charles Evans Cemetery, which was a block away and the county’s first (1846) and largest “rural cemetery” (over 100 acres).

Every Sunday, my brother and I accompanied him on a tour of his mysterious park. The proper entrance was a grand russet sandstone Gothic porte cochère. High curbs on either side of the brick drive allowed sheltered carriage access. Inside, lay a riotous necropolis of small structures, from pyramids to temples; enormous trees with iron nameplates; pavilions; statues of infants to infantry and even, furniture. The furniture was built to last of cast iron, steel wire and “wood” as hard and cold as the cheek of a marble weeping angel. But was it wood?

As a child, I was fascinated by what I later learned was“faux bois”, or false wood handmade of cement and steel. What also intrigued me was why anyone would want to have furniture in a cemetery. Isn’t everyone lying down, underground?

My grandfather’s park was born of the 19th century. Before the 1830s, the dead were buried in churchyards, usually in towns and cities. As cities grew with the Industrial Revolution, the churchyards filled up, despite the digging deeper and reuse of graves. Land became too expensive close to town to add onto old cemeteries. Epidemics led to the need to bury the dead in an area safely removed from the living. Unlike churchyards, rural cemeteries were nonsectarian. The emergence of middle class leisure time allowed the living to visit the last residences of their dead in a pastoral, contemplative landscape that was patterned on the naturalistic gardens of English country houses. Rural cemeteries became places where the living picnicked or raced carriages as well as meditated upon the threshold of the present to the future. Romaniticists, Transcendentalists and Pantheists were drawn to the idea of the rural cemetery as a place apart from worldly concerns. Rural cemeteries embraced early ideas about urban planning and public park design in an era when parks and art were enjoyed by elites only.

Visitors to rural cemeteries needed outdoor furniture, then a novel idea. Cast iron and steel, in the forms of wire and rods, were adapted to furniture design. By the mid-1800s, French inventors were applying cement mixtures to armatures of steel rods and wire. Initially, the idea was to produce large urns and containers that were too challenging to make of ceramic. Inspired by natural forms, craftsmen shaped “ferrocement” into furniture, railings, bridges and other garden appurtenances according to their own personal sense of style and whim.

By the early 20th century, cemeteries became “memorial parks”, or “lawn cemeteries”, built on smoothly-graded sites to accommodate the needs of the masses and minimal maintenance. Gone were unique above-ground monuments in favor of standardized ground-level plaques that would not impede lawn mowers. Features such as walkways, flower beds, water features, resting places, even trees, were kept to a bare minimum, lest valuable burial plots be unsold.

Faux bois remained fashionable until World War II in the United States and Europe. In Los Angeles, one may see a good deal of faux bois in Griffith Park’s Fern Dell. Most of this faux bois shows decades of use and is in need of major restoration. In places, bare steel re-bar hints at what once was. Much of the original faux bois has been replaced with pipe railings. Part of Friends of Griffith Park’s proposed restoration of Fern Dell would include faux bois restoration.

Across the country, vintage faux bois is being restored and new applications are being created by present-day gardeners, sculptors and pool contractors. The Huntington Library Botanical Gardens have recently restored its famed faux bois wisteria trellis between the Japanese and rose gardens. The Huntington restorer, Terry Eagan, discovered that air pockets are the primary cause of deterioration. Air pockets in poorly-applied cement can fill with water, rusting the interior steel. The rusting steel swells and cracks the cement.

Perhaps the most famous use of the faux bois technique anywhere is Simon Rodia’s Watts Towers here in Los Angeles. The faux bois-style technique is not innovative, but the result is uniquely Modern. Rodia worked over 30 years building nearly-100-foot towers of steel rebar, wire mesh and cement embedded with found bits of tile, glass, mirrors, porcelain figurines and seashells. Many items were given to him by supportive local residents. Impressions from objects pressed into the wet cement abound. One man’s life’s passion, the Watts Towers are the grandest example of outsider art.

Please join Richard Stanley on July 13th at the Los Feliz Branch Library for a talk on “The Origin of Parks”. More infomation available on our website.