You are at:Home»Current Events»The Rim of the Valley
By Kathryn Louyse on November 9, 2015 Current Events, in the news 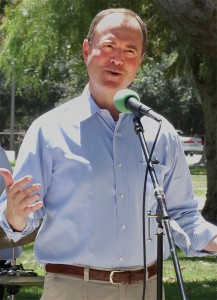 FoGP board member Linda Othenin-Girard recently sat down with Congressman Adam Schiff, representing California’s 28th District which includes Griffith Park and surrounding communities. As a long-time champion of the environment, Schiff is the author of the Rim of the Valley Corridor Study Act, signed into law by then President George W. Bush in 2008.

Linda Othenin-Girard: Congressman Schiff, thanks for joining me today.

Adam Schiff: Great to be with you.

LOG: What is the Rim of the Valley?
­­
AS: The Rim of the Valley is an area that covers several of the mountain ranges and wildlife corridors in our region. It’s an area that is one of the rarest habitats in the world, a Mediterranean chaparral habitat that we’re trying to preserve for future generations. But when people talk about the Rim of the Valley, what they’re referring to is a multi-year study that’s been going on to explore whether that area ought to become part of the SMMNRA (Santa Monica Mountains National Recreation Area) and be preserved so that we can keep beautiful mountain lions alive. So we can continue to see bears come down into the foothills and eat meatballs out of peoples’ garages, and enjoy the abundant wildlife around us. So Rim of the Valley has become synonymous with one of the largest open space preservation efforts in years.

AS: As a State Senator I came into contact with large groups of constituents who were really dedicated to the preservation of open space. They were worried about runaway development of the hillsides, losing a lot of what attracted them to move to Los Angeles to begin with. They wanted to make sure they could pass on to their kids and grandkids the same kind of wonderful access to wildlife that they had when they were young. In the 1970s Congress had the foresight to create one of the largest urban parks in the country, the SMMNRA, and it made me wonder whether Congress today would have the same foresight. Now they knew back in the ’70s LA was going to continue to grow, and if they didn’t act to preserve some of this beautiful wilderness area it would be gone for good, and we are now confronting a very similar situation. I introduced legislation about ten years ago to study a dramatic expansion of the recreation areas in our region. It took years to get passed, to get funded, it’s taken years to undertake the actual study itself, but that study now is nearing conclusion and we’ve had thousands and thousands of people provide public comment and input has been overwhelmingly in favor of expanding this national park to include the Rim of the Valley.

LOG: The plan and the study provide four options for the National Park Service to consider. Can you describe briefly what those options are?

AS: The options really go essentially anywhere from the status quo to more than doubling or tripling the size of the existing national recreation area. We proposed a combination of two of the larger alternatives, C and D, that would not only maintain a lot of the recreational opportunities within the Rim of the Valley, but make sure that the Rim of the Valley areas that were incorporated into the park would be sufficient to include these important wildlife corridors. We just saw a couple weeks ago, another mountain lion killed trying to cross the freeway. We’d like to make sure that we preserve a broad enough space and the interconnectivity of these different habitats so that you can have these magnificent cats survive. So we have really recommended the largest alternative that has been proposed. The Park Service recommended the next to largest alternative which would still be a doubling of the size of the existing park and I was frankly pleased that they went as far as they did. They went big. We are pushing now for the final report to embrace the most expansive alternative.

LOG: So how is this huge park area going to be managed? 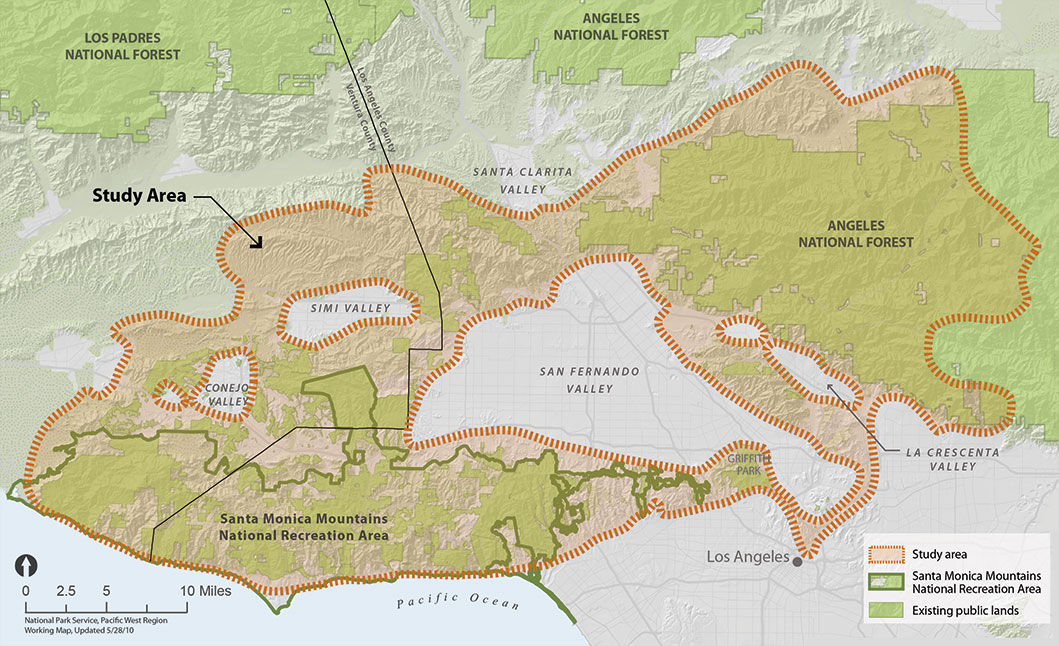 AS: The challenge is we haven’t devoted adequate resources to the maintenance of the parks that we already have. The small smattering of people that have expressed reservations about expansion of the parks have largely done so because they said, “We’re not investing enough in existing parks; why do we want to expand the parks?” There is some merit to this point. We aren’t investing enough in existing parks, but in my view that’s not an argument to say we don’t want to preserve any new park land because frankly, those areas are going to be gone if we don’t act to better maintain or preserve them. So we need to do both. We need to invest more in the maintenance of our current parks, and we need to continue expanding those park areas that maintain what people really love about Los Angeles which is we are one of the very few major cities in America where you can live in an urban/suburban environment and still have immediate access to the most incredible wildlife.

AS: We probably received about 5,000 comments in the public comment period and of those 5,000 maybe there were a few dozen that were opposed, so it’s a very small group. Some of the folks in that group are already within the existing SMMNRA and they don’t like the Park Service. That is a discrete point of view but it frankly is shared by very few people.

LOG: What kind of impact will this new organization have on the average person who goes to Griffith Park?

AS: I don’t know if you’ll see differences in Griffith Park itself but I think most park goers tend to like the outdoors; they like having all that green space and area to contemplate nature and so it’s not a surprise that many people who utilize Griffith Park also utilize the Verdugo Mountains, the Santa Susanas, the San Gabriels and the Angeles National Forest. If you look at P22, he would not have been able to make it to Griffith Park had it not been for the Rim of the Valley. If those areas are gone it would be very hard for a cat like that to survive. So there is an impact on Griffith Park, but I think in the broader context the real impact is that for those that really cherish open space and the accessibility to nature, this is a big step in the right direction.

LOG: There are people who would like to see the Verdugo Wash included in the Rim of the Valley especially in light of what you just mentioned about wildlife connectivity. How do you feel about adding it to the plan?

AS: I am completely open to these suggestions and this is a good opportunity for me to talk about how the process works. The Park Service has released a draft report and they are now working on a final report, so the public has a final opportunity to weigh in before they come up with that final draft. And we’ve been pushing them to work on this in a timely way, so that we can try to mov­e legislation this session. But it’s important to know that the report and recommendations of the Park Service are only that. They are a study and a recommendation. None of that is set in stone. What is necessary and the next step in the process is that I’ll introduce a bill to set out what the new boundaries of that park should be. It really is up to the public to decide what we want. We want to be guided by what the Park Service has to say both because they are experts in some of the wilderness and connectivity issues but also because it’s easier to get legislation passed with their support than over their opposition. Once they come out with their final report, I want to get feedback from all those in the region. What changes do they think should be made? So I’m very open to hearing a case made for the Verdugo Wash and I look forward to having those conversations.

LOG: And finally. What will this cost and who will pay for it?

AS: So far each of these studies has cost four or five hundred thousand dollars. The cost in terms of the recreation area itself  would be additional management which might require additional personnel. I would hope that we would want to see not just a new park on paper but in fact the direction of resources to that new park; to figure out what to do after fires; what to do in terms of non-native species; what to do in terms of trails, and wildlife preservation. I would want to see us work with the public and the Park Service together, to figure out the game plan. To the degree that we can acquire new resources for this, it makes it all the more doable. I know there’ve been concerns with the San Gabriel Monument that was just established by the Obama administration, that while there is a new monument there they don’t see much on the ground. Apart from the marker they don’t see additional resources, in terms of trail maintenance and other things. So I think the first step is to make sure we have some rubric in which we can direct resources. If they are outside of the park it is very hard to direct federal resources, but if we are successful, then we want to make sure to obtain the resources to really maintain and preserves those areas.

Linda Othenin-Girard’s interview with Congressman Adam Schiff can be heard in its entirety here… https://soundcloud.com/friendsofgriffithpark/schifflog-rimvalley-tops-and-tails-192