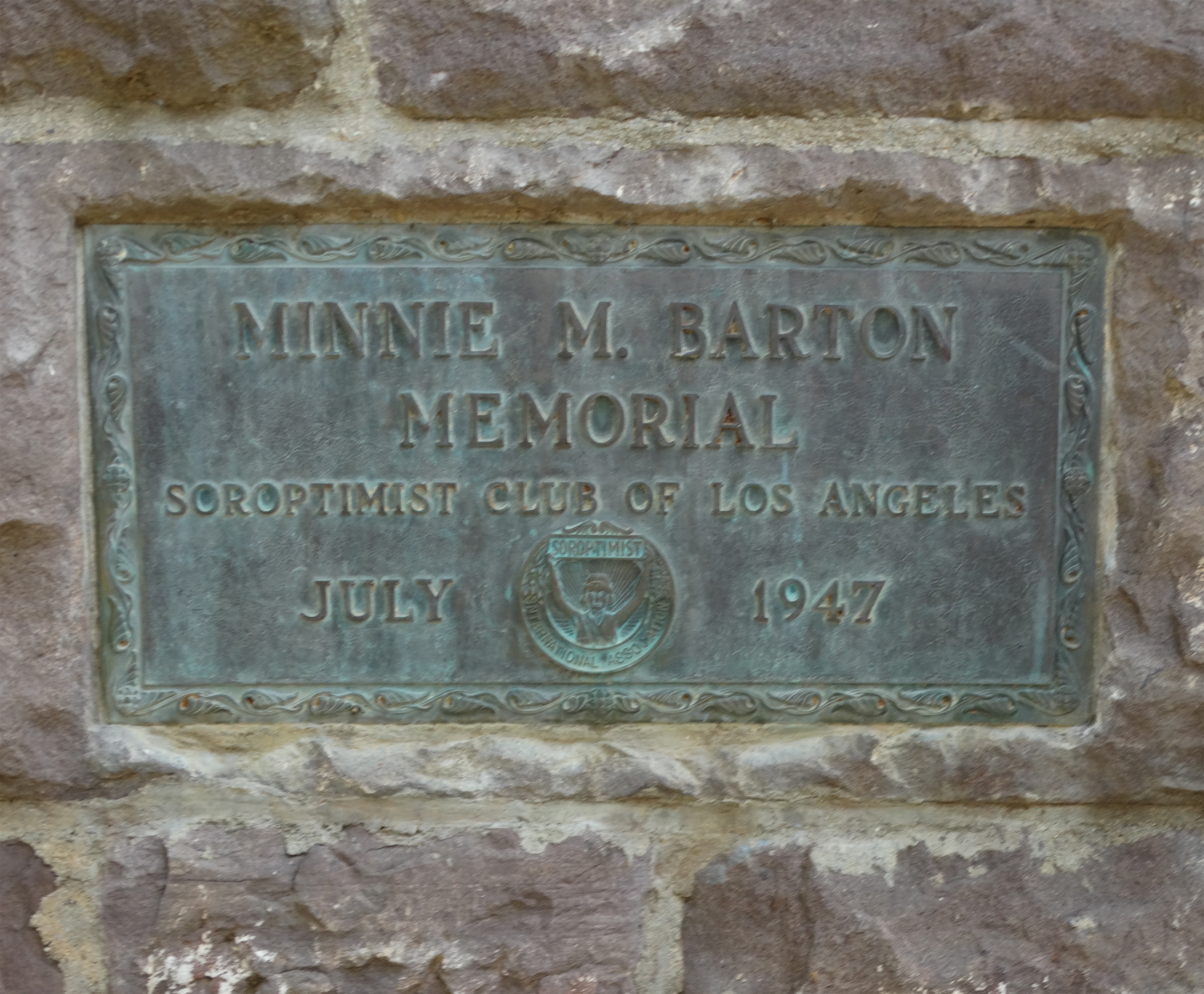 If you were to wander through Fern Dell headed toward the Observatory, perhaps you might be inclined to stop along the route and admire some of the lesser known features. Take for example, the little picnic overlook along the right side of the pathway, built in the late 1940s to honor a woman named Minnie M. (Hafley McCoach) Barton.

The plaque in the front does not talk about who she was, nor does it explain why she was honored by this organization. So, a little digging was in order. She originated from the great plains of Kansas, moving with her husband John Alexander Barton to Los Angeles in 1905; at the time a rough and tumble township, vastly smaller than the teeming metropolis we see today. During the early part of the 20th century, LA was a magnet, drawing those desiring a better life, or wanting to escape from back east winters, or looking for an easy buck. Along with lawless men came women tarnished by drugs or prostitution, lacking basic education or a means to improve their lives. Barton realized early on, this was a problem in need of a solution, so she set out to help these outcasts ignored by society, sometimes inviting them into her home to get clean and sober.

Eventually her work with these women was recognized and she was hired by the LAPD as a probation officer (the first woman to hold the position). And as LA grew, so grew the problems of indigent women with few prospects. Barton, realizing the obstacles could not be easily solved, petitioned LA City Council to help find a solution. Their response was “you are trying to reform those women. The problem is not ours – it belongs to the churches.” Turned down by city council, she then contacted various women’s club presidents, “stated my questionnaire to them, and the next meeting was so big we couldn’t get them all in the room. The clubwomen have been helping ever since.”

Many of these organizations invited Barton to speak about the plight of women, eventually sufficient funds were raised to purchase property in the West Adams district and the first halfway home was erected and named the Minnie Barton Home. More purchases were made, and more homes were erected, such as the Bide-A-Wee Home in Boyle Heights, designed to house women and children. As the need for housing and services continued to grow (especially through the Depression years), Barton quickly realized the bulk of services were not equally applied to women in need, commenting “The women of the United States have waked up to the fact that it is up to them to right things. Just look at all the things that are being done for men and boys in this city, and all the money that is being spent by the city and by social agencies. Compare that with the little that is being done for girls and women who get into jail, are put on probation, are deserted by their husbands and have no one to care for them, or for that pitiful older group of women who nobody wants. When you think of their problems, you realize that it is up to us women to take care of them.”

After a lifetime of service to women and children in need, Minnie Barton passed away on July 28, 1946. In July, 1947 she was honored with a simple plaque in Fern Dell by the Soroptimist Club of Los Angeles; a volunteer organization for business and professional women founded in 1921 to improve lives of women and girls throughout the world. One of my favorite quotes by Barton from the 1940 LA Times can be applied to today’s society “Rehabilitation is not yet a popular idea among many people who still think punishment and utter defeat is the only end of crime. I have always felt that answer lies much deeper than that.”