You are at:Home»Current Events»The Unrelenting Drought
By Kathryn Louyse on November 10, 2015 Current Events, in the news

Redwoods along the golf course in Griffith Park, some marked for cutting, have been seriously affected by the drought. On the other side of the course, recently a dead eucalyptus fell onto one of the golf cart roadways

It’s not just trees that are suffering from a lack of water… it’s all living things, including Griffith Park wildlife.

Although we’ve recently seen some rain, it’s certainly not the sustained rainfall needed in order to fix the four-year drought issues. Is climate change really affecting parklands in Southern California and if this is the case, can we as a community adjust to these changes? I believe the answer is yes. 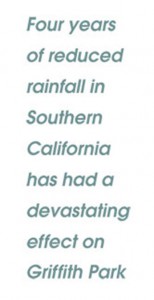 Lately, it seems at least once a week we’re hearing about the effects of the drought. And while cities and city residents have been tasked with reducing water usage and turning off garden sprinklers, the potential loss of trees might far outweigh water-saving benefits. Go anywhere in the Southland and look at lawns and parkways. While there are some green lawns, the vast majority of lawns and gardens have gone brown as more people understand the severity of the water crisis. The breadth of devastation across the California landscape is tragic as nearly a million trees have succumbed to drought conditions. Now homeowners are facing the real possibility that in cutting back water to their gardens, they may have inadvertently placed the health of their trees in jeopardy. And beyond concerns about falling trees, falling branches and the increasing number of pests affecting Southern California trees comes a new concern: the potential effects of an El Niño this winter. If trees are already stressed, what will be the consequences if this weather pattern occurs?

In a recent AP article entitled “Amid California Drought,”  Evergreen Arborist Consultants said, “You don’t want to be cutting back the water to the trees as the trees can’t adjust.” In Griffith Park, the native habitat areas have trees well adapted to our dry climate­­­, though now even their health is challenged. However, planted areas of the park utilizing water-thirsty non-native trees, such as along roadways, are not faring as well under the water-saving plan. More important, when dead or dying trees are removed from parkland, those trees must be replaced so as not to destroy natural habitat and canopy cover.

Those concerned with how the crisis is affecting Griffith Park are considering alternatives to watching trees die. If you hike in the Park, you may have noticed some of these new measures. Many of the Park’s golf courses are now being watered using “purple” water, in other words, recycled water. Currently not all courses utilize this water, but Rec and Parks is working with the DWP to rectify the situation and soon, all courses will be using the same recycled water source from a treatment plant on the east side of the river in Atwater. Also, mulch is being used more extensively in areas that don’t get sufficient water. In Fern Canyon, FoGP volunteers have laid down mulch to help protect new native plantings in addition to the hand-watering that’s occurring several times per month. In some areas without water sources, “irricades” are being positioned to help new trees take root. (Irricades look like hollow roadway barricades and are designed to channel water via soaker hoses to trees.)

While effects of the drought are clearly evident on flora, these effects are less evident in the park’s fauna. Surely, there are some detrimental effects on wildlife, but it’s hard to assess the extent or whether there are any major risks for any species populations. Perhaps certain species wander into Park-adjacent areas more, but most species have adapted to periodic arid conditions, just like our native plants. While there are concerns that our large mammals are not getting sufficient water, our scientific advisors say it should not be a concern. Wildlife experts caution against placing water out for wild animals as these animals become more dependent and acclimated to humans.

The bottom line — yes, there is a drought, and conservation of resources will help. But like other communities facing similar concerns, our community needs to address this issue for the long term. Suffice it to say, in general, things that man has not touched are holding up just fine.