You are at:Home»Current Events»The Western Gray Squirrel – Will They Survive in Griffith Park?
By Kathryn Louyse on November 28, 2016 Current Events, in the news, Rodenticides 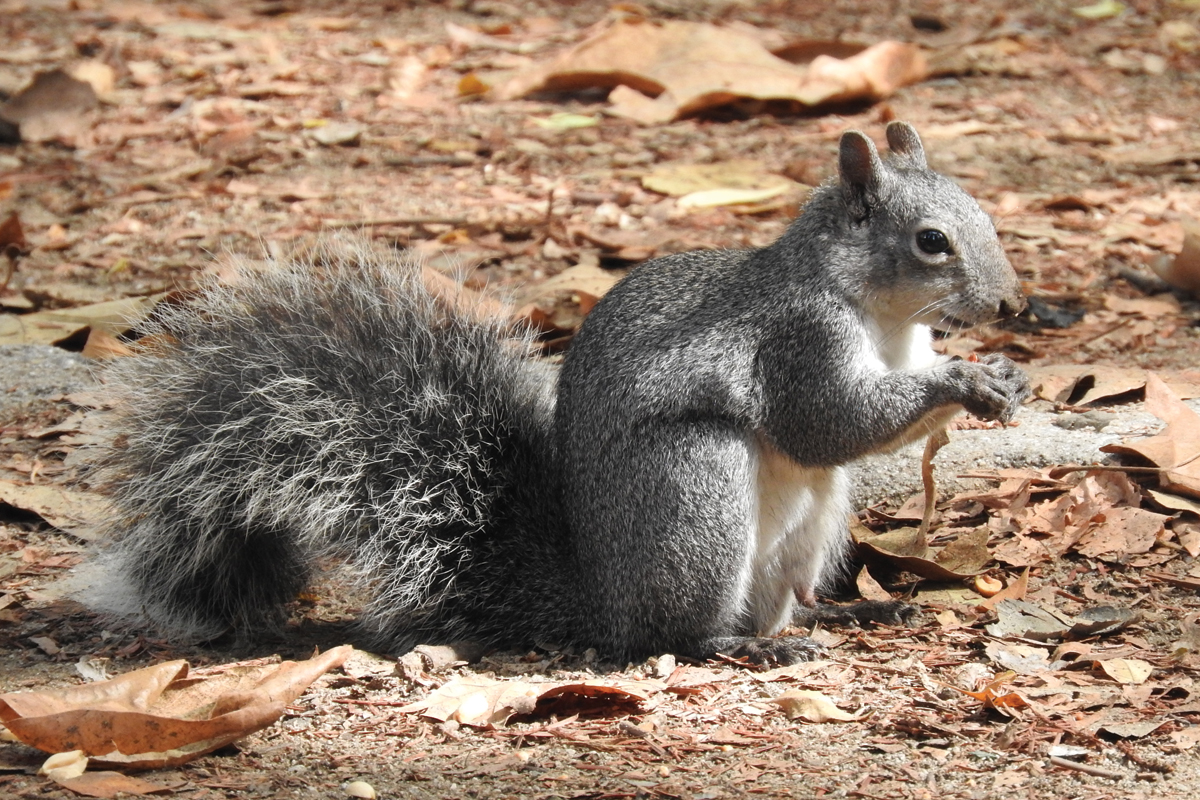 The results of the first genetics study on Western gray squirrel (gray) in California were recently released, and according to the study, this species should not be taken for granted. In fact, an article outlining the proposed research was published by Friends of Griffith Park in the Fall, 2014 Griffith Reporter.

The study conducted by CSULA biology grad student Chris DeMarco was underwritten by FoGP because of the importance of the “gray” in Griffith Park, but may provide a lot of value toward the survival of the species over all.

The gray is the only native tree squirrel species in Griffith Park and only one of two in Southern California (the other is the flying squirrel found in the San Bernardino Mountains). ­­­People should not mistake the California ground squirrel, a native ground dwelling species, for the gray.  The other tree squirrel in Griffith Park, the Eastern fox squirrel, is a non-native species that was originally introduced to California as captive pets, but was either purposely released, or escaped into the wild by 1904.

In Griffith Park, we see both native and non-native tree squirrels sharing resources in several pockets of the park, including Fern Dell and Vermont Canyon. One striking difference – the Eastern fox has integrated into residential areas much more than the grays.

For the study, genetic material was collected using harmless “hair tubes,” which are plastic tubes baited with walnuts that had tape inside to catch hair as the squirrels went in and out of the tube. The hair follicles contained the DNA used for DeMarco’s research project. Native species gray hairs are easily distinguished from Eastern fox and ground squirrel hairs by color patterns of the hair shaft. These samples were collected over a seventeen-month period from three different gray population pockets within Griffith Park, as well as two outlying areas.

I sat down with the researcher, Chris DeMarco, his academic advisor, Dr. Alan Muchlinski, and Dan Cooper of Cooper Ecological Monitoring, who has been FoGP’s scientific director, completing about ten surveys and studies in the last ten years. Filtering out a lot of the technical lingo, the two hour interview is summarized:

Gerry Hans: Can you summarize the results of the study?

Chris DeMarco: According to data, grays, whether considered as a whole population within Griffith Park or as the smaller subpopulations, are impacted by genetic factors of endangerment and extinction. Their genetic status is the result of isolation, lack of genetic richness, and high relatedness within the subpopulations. These factors limit the ability for grays in Griffith Park to maintain a viable population and to adapt to environmental change. This lower level of fitness makes them vulnerable to extinction.

Hans: So the pockets of grays even within the park are isolated? (The population pockets chosen for the study were Fern Dell, Vermont Canyon, and the Boys’ Camp.)

DeMarco: Yes, the relatedness of squirrels within each sub-population is high. The relatedness between the subpopulations is much lower. What’s interesting is that squirrels in Fern Dell and Vermont Canyon are located near each other, yet there is a low level of relatedness. Fern Dell squirrels were more closely related to Boys’ Camp squirrels, even though it is on the other side of the park.

Dan Cooper: That leads to a question of how these squirrels move to other areas. Hans and I have seen them well outside of established pockets, but repeated sightings in those spots aren’t regular. Yes, to some extent they are moving but we don’t know what it takes to establish new pockets or how those squirrels that move are received into other established pockets. Are pines important and if so, is it because of a food source, cover or what? We know the species move through chaparral, as well. So maybe they won’t even mind that all the pines are dying along park roads.

Dr. Alan Muchlinski: The pines may be more important for staying power in the established pockets than for movement. 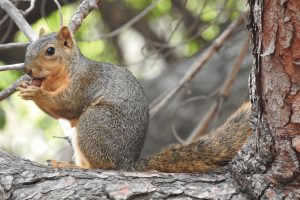 Hans: Where does the competing Eastern fox squirrel species fit into the picture?

Muchlinski: Generally, in small areas, they seem to out-compete. And where you have an area where no Eastern fox are present, the grays stands a better chance.

Cooper: Right. There are places where we see only fox squirrels where you might otherwise expect grays. Oak Canyon is an example of that. What’s even more interesting are the areas where neither species seems to be active, such as remote Royce Canyon. We don’t know why. We may have some grays in places we just haven’t noticed, too. These animals aren’t dumb. Over time, factors work together to keep populations in certain areas, such as food, canopy, shelter and more. Humans become part of that equation, too.

Hans: What is your sense of grays in Griffith Park historically?

Cooper: I expect you could show that grays peaked in the 1960-70s prior to the widespread saturation of fox squirrels and after the significant tree planting in the park produced mature trees.

Muchlinski: Griffith Park has some things going for it. You are looking at 50-60 years already of co-existence of the two species in the park! And grays’ numbers are not tiny by any means. Some of the reason may lie in the food sources here, but also in the fact that Griffith Park is large, although mostly isolated. If it is possible to manage the fragmentation within the park to assure diversified food sources they may stay here for hundreds of years to come.

Hans: That’s what I like to hear! Back to the study itself, how many individual squirrels actually participated in your study, Chris?

DeMarco: We started with 87 samples collected from grays in Griffith Park, but reduced that sample size to 57 Griffith Park individuals after samples were eliminated due to duplicative squirrels and other reasons. Of course, not every squirrel was sampled. Well, except possibly the Boys’ Camp subpopulation where there are very low numbers.

Cooper: That is really important information in itself. So now we can say with some certainty there are more than 50 grays and probably less than 100 in Griffith Park.

Hans: Yeah, we haven’t even been able to put any kind of number on our deer population yet! Chris, what will be the straw that breaks the camel’s back? Your study indicates a high likelihood of a local extinction at Boys’ Camp. How long until that happens since the bottleneck effect is already present there?

DeMarco: There are different models which could predict time to extinction, but the factors are genetic richness, in-breeding, low gene-flow…  All these estimates of genetic diversity are significantly below adequate levels for the Boys’ Camp population. The Vermont Canyon and Fern Dell populations are not as dire, but still below ideal levels.

Cooper: What makes any species go extinct is the question, really.

DeMarco: You can ultimately look at a population’s ability to sustain itself as the population’s fitness. It’s called the extinction vortex when factors work against fitness, including in-breeding, genetic drift, and small population size which makes environmental challenges more difficult to overcome. [Note: In layman’s terms, “genetic drift” is randomness that occurs without there necessarily being a natural selection reason behind it.] ­­­

Hans: One of those environmental stressors is likely rodenticides. How could we study this, short of finding a dead squirrel like I did last year and having toxicology testing done?
­
DeMarco: With proper regulatory permitting, blood samples could be taken from squirrels, similar to what was done with the bobcats studied by scientist Laurel Serieys, who found anticoagulant rodenticides in 95% of them.

Hans: What I really like about this study is that it points to management concepts to improve the genetic health of the park’s grays. The first possibility is genetically mixing grays between the park subpopulations, since they seem to be fairly isolated themselves. The other is more radical by bringing individuals that have more genetic diversity from outlying areas. What are the pros and cons?

DeMarco: That depends on what the ultimate goal is, but if habitat continues to be fragmented, in the end you will also continue to see these isolated populations not being able to sustain themselves. Ideally, improving habitat corridors in the park would enhance movement and improve the genetics. If that can’t be done, then there is the possibility of creating
“artificial corridors” by translocating individuals among the subpopulations.

Cooper: It’s one thing to transplant animals when a species as a whole is critically endangered. There are risks and so this might be a last resort, especially bringing in individuals from outside the park. Even moving animals within the park you need to consider these animals have family bonds and reintroduction has risks due to stress. And would the missing animal have impacts on the population it came from? Would they attempt to “home” back to their original population?

DeMarco: Barring introducing disease or other problems, bringing genes from outside park populations would provide more of a genetic rescue than from the subpopulations within the park. Both have their risks, though.

Muchlinski: Translocating within the park may be more reasonable, but we do need to realize that it may not be enough genetic rescue by itself. Making decisions like this lies more in the hands of the conservation biologists, such as Julie King and others who worked on the Island Fox rescue in the Channel Islands.

Hans: As usual, one study seems to lead to the next but now we know something needs to be done. In Griffith Park, better connectivity is what we should strive for in the short-term. But grays are declining all along their distribution area. The state of Washington lists them as a sensitive and threatened species, and Oregon has them listed as a conservation strategy species. Why doesn’t California have them on a list?

DeMarco: Really good – and tough – question. There are different ways of categorizing and there are different lists. The real problem, though, is that California is huge and there still are a lot of grays. However, as previous work by Cooper and Muchlinski shows, their numbers are diminishing in the lowland areas of Southern California with extirpation events in some areas.

Cooper: At the state level some species seem to fall through the cracks since they may be abundant in other parts of the state. You may be onto something here. We pulled together a scientific panel in Los Angeles County to put a group of bird species on the county’s special concern species list.

Hans: Can we do that for grays?

Cooper: Yes, there are some other mammals that should definitely be on a county list, too, such as the Pacific kangaroo rat. There would need to be county-wide input, meetings, and compiling various publications. It might take a year or so to do, but it would be great for the county to have these.

Hans: I think there could be great support for this! Talk to your colleagues and let’s do this!
While this study focused on Griffith Park’s population of grays, the concerns addressed here are applicable to many regions of Los Angeles and California. Management of the Western gray squirrel in Griffith Park can serve as a model for conservation of Western gray populations and thus helps ensure the species’ survival.

Thanks to the those taking part in the interview: